Using their teeth during play with other dogs is normal for puppies, but they need to learn that it’s wrong to use their teeth when playing with people.

Every time your puppy bites your hands hard enough for it to hurt, you should yelp or shout ‘ouch’ and turn away as if you’re nursing your wounds. Ignore him for at least 20 seconds before restarting the game or interaction.

Continue as before, but this time yelp even if he bites you gently or if he tugs at clothing.

This process doesn’t work for all puppies. If he has learned to bite to get your attention or if he’s more than 14 weeks old then he may get more excited when you yelp. If you’ve tried yelping for a week or two and things aren’t getting any better then you’ll need to change your approach. Instead of yelping, give a calm and clear ‘no’ when he bites and then immediately pick him up and isolate him in another room, or behind a baby gate for two minutes.

If he gets more excited when picked up, then just leave the room quickly and close the door behind you. After two minutes he can join you again, but don’t immediately start playing. Ignore him until he’s sitting or lying down quietly before you reward him by restarting the game.

If you’ve an adult dog who is over enthusiastic with his teeth, then the second approach is the most useful. Older dogs are perfectly capable of learning that using their teeth recklessly when playing with toys or taking treats will end the fun stuff. If your fingers or hands are nipped when playing with tug toys then the easiest approach is to say ‘no’ as you drop the toy and just walk away immediately. This only works if you’re playing with your dog and you need a different approach if you’re trying to get stolen items back. 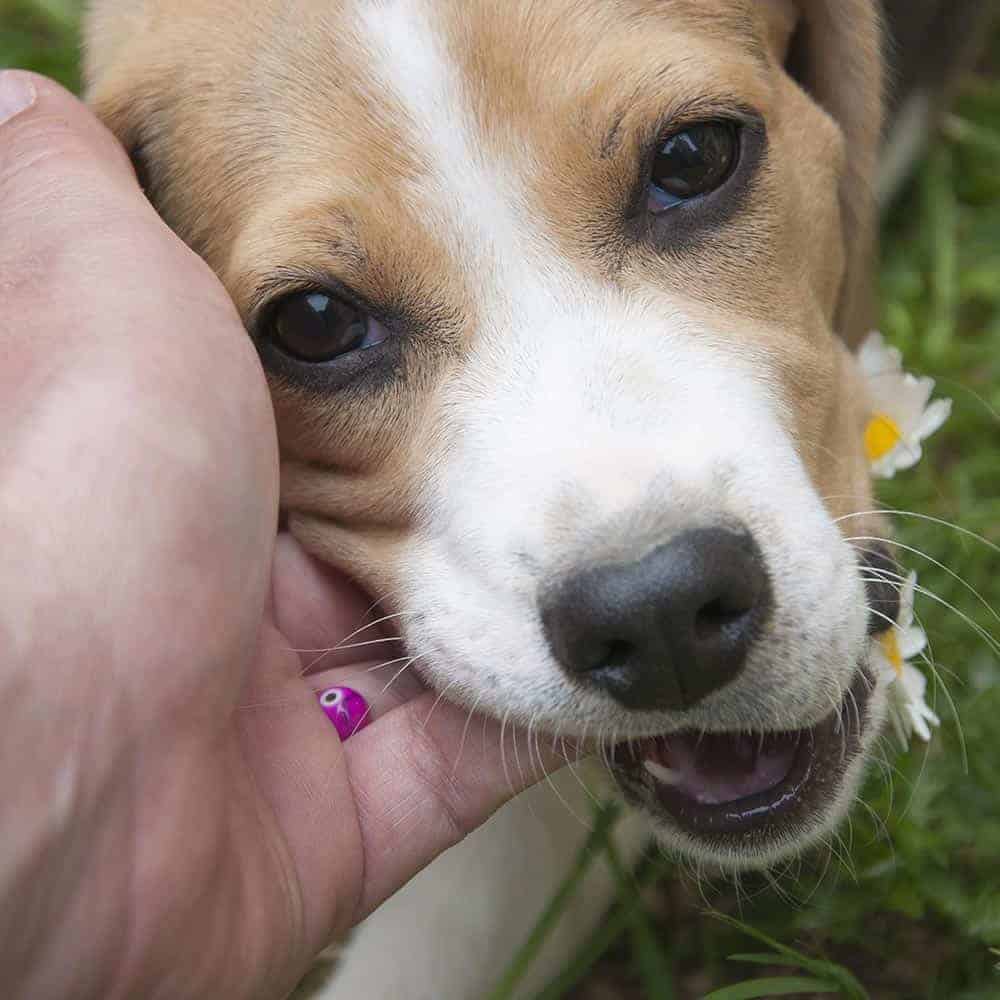 If you don’t take the time to let dogs know that you’re unhappy then they can’t be expected to realise they need to be careful. The easiest way to do this is to stop playing with careless dogs the moment they get too rough or your puppy bites.

In the same way, if your fingers are bitten when you give him a treat, you should let him try to take it but instantly say ‘no’ and take your hand away without giving up the treat if you feel any tooth pressure at all.

If he’s very rough then you may need to wear gloves at the beginning.

Praise lavishly when he starts to take the food more gently and gradually build-up to the point where you don’t feel any teeth at all.

This is an exercise you need to work on when you aren’t training other things (such as sit or down) at the same time.

If you want to use food rewards for other exercises then keep your fingers well away by dropping them on the floor until the grabbing is under control.

Beagle Welfare was formed in 1979 to give help and advice on beagles and to rehome those whose owners, for whatever reason, are unable keep them.