Beagles that show aggression over toys or stolen items often demonstrate it when owners try to move them from the furniture.

People often assume that dogs instinctively know that they should get down from furniture when told to ‘get off’ without having any training of what ‘off’ means. An owner staring and speaking harshly is often seen by the dog as a totally unprovoked threat of aggression, since dogs never move each other around in this way. Some dogs can get very growly if they think you’re likely to wander up and ‘start something’.

It’s so much easier to simply call your dog from the furniture for a food treat when you want to move him.
If he has a comfy bed of his own, then the sofa will become much less appealing. Make sure that his own bed is warm and cosy and out of the way of banging doors and clumsy feet, but still close enough to family activity.

Reward him for using it by feeding, praising and giving attention when he’s in it but don’t touch him if he’s tired, sleeping or has reacted badly to approaches in the past.

If you’re worried he’ll react badly when disturbed, simply stick to dropping food treats to him as you pass by and he’ll soon start to look forward to you coming near.

One form of behaviour that isn’t necessarily attention seeking is stealing food items, wrappers or other items that can be seen by your hound as being valuable.

I use the word ‘steal’, but it’s important to remember that theft is a very human concept. Beagles tend to see it as having the opportunity to possess items or eat food that others have carelessly overlooked. After all, if you really wanted it you wouldn’t have left it lying around on the coffee table! This has nothing to do with concepts of ‘dominance’ or status in the household – in fact, it’s often the lowest of individuals that guards the most vigorously.

Once a beagle has a food item, it’s probably a lost cause – though if it’s a roast chicken, you may have a chance of getting some of it back if he tries to swallow it whole, so prevention is more realistic than a cure.

If your hound is stealing food from the bin, then move it out of his reach behind a cupboard door or at the back of a worktop and never leave food close to the edge of kitchen worktops when you leave the room or turn your back! Removing temptation is the simplest way of avoiding problems.

What’s more of a problem is when a hound picks up an object that isn’t edible, these could have expensive repercussions. This may be in value of the object (yes, the TV remote control again as well as mobile phones, wallets and so on) or from the vet’s bill incurred by needing such items as peach stones, socks, gravel and so on surgically removed.

Picking up this type of article can often start as attention seeking, but often things can escalate quickly and the hound ends up frightened by your reaction. You might think that a sensible dog will then avoid picking something up the next time.

Unfortunately, dogs’ brains don’t work this way and they often just learn to grab it faster, run under the dining room table and brace themselves for a confrontation.

In these situations, aggression from your beagle when confronted usually stems from two sources:

The first fear, that of losing the object, is often made worse by our reactions when the object is first investigated. If we leap up and lunge for the mobile phone the first time it’s sniffed, then we’re teaching the dog how valuable it is and if we’re willing to fight for it then it really must be worth having!

Instead, try to approach calmly and gently say ‘thank you’ as you remove it – and then remember to keep it on a shelf in future! Reward him with attention or a game and treats when he chooses to play with a dog toy instead.

Dogs learn quickly if they get a rewarding reaction when forbidden objects are picked up and no reaction when they play with their toys.

Without knowing it, we’ve accidentally taught them to behave in exactly the opposite way to the one we’d like. More toy play, toys that dispense food (stuffed Kongs, Buster Cubes and so on, loads of exercise and plenty of fun training sessions will help by giving more acceptable outlets for a hound’s energy.

You may have inherited a beagle that already has a problem and has started guarding stolen objects and this is when the second fear of getting hurt comes in.

If you haven’t trained him to ignore inappropriate objects, then it’s very easy for confrontations to escalate and the dog to feel the need to defend himself. In bad cases, just the presence of an object near the dog can trigger defence reactions and sometimes something as simple as staring at the dog whilst saying his name could have meant the start of a confrontation in the past and may trigger growling or snapping. 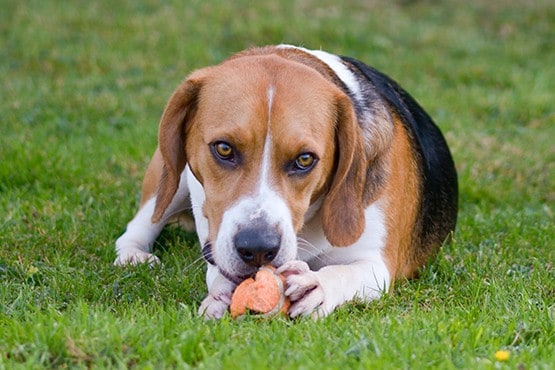 So what can you do?

Initially the dog’s perception needs to be changed from ‘my owner will use force to take things from me’ to one of ‘good things happen when I give up an object’. It goes without saying that you must be very careful with a dog that may bite.

If you have a dog that has already bitten, or if you feel he could do so, then you must look for professional help. Under no circumstances should you ever allow young children near a dog with this kind of problem, even when supervised.

Let’s now look at a few common difficulties such as:

The first step is to teach a reliable command you can use to distract him when you catch the dog with something and ‘sit’ is probably the most effective. From now on you should hand feed the dog its meals; it’s easier with dried food and use a spoon if you feed tinned. Ask for a sit before each piece is given until your hound sits automatically when you are holding food. Don’t teach him to sit by pushing down on the hound’s bottom. Instead, hold the food just above his nose and then slowly move it back so he has to look up and back and then feed and praise when his bum goes down. In case he lies over objects, also teach him to sit up from a lying position by using the same action.

Alternate throwing the reward behind him for sitting with rewarding from your hand. Throw the food far enough away from him to take at least ten seconds to find it and come back for more. As he starts his return you can call his name and get in some recall practice at the same time. Going away from you to get thrown food will give you a chance to pick up the object safely when his back is turned.

You may also need to make your hound more comfortable with hands near his head and mouth. Once he’s sitting happily (with his mouth empty) gently touch his head and face before giving the treat. Don’t go too fast, he needs to be happy with slight, gentle touches before you try longer strokes. Only when he’s totally happy and has an ‘expectant’ look that says he knows the treat is following can you gently touch his lips and teeth.

You must wait until his sit is immediate and reliable and he’s happy about his face being touched before you start to work with an object near the dog. I really do mean happy – just putting up with it isn’t good enough! If he freezes, growls or shows the whites of his eyes, then he may have more of a problem about being touched and you should seek professional help.

Give him an object that he can investigate, but not one that he’s likely to scoot off with and guard. Drop it in front of him then let him take it or investigate before asking calmly for the sit. Confine him to one room so he can’t disappear, but never chase him if he tries to take the object elsewhere. Most dogs can’t sit and hold something at the same time unless specifically trained to do so and with any luck he’ll drop the object. If he doesn’t then just stand still and wait. His jaws will get tired eventually. When he sits and drops the object you should throw the reward behind him and pick up the object before he comes back.

Now immediately give it back to him and repeat, repeat, repeat until he doesn’t even look at the object but comes and sits for the reward instead! After ten minutes of this he’ll be tired, happy and probably not want the object anymore.
You’ll need to do this same exercise over and over before you start to try it with more interesting objects. With loads of repetition this will teach him that running away from objects equals ‘good thing happening’. Until you can do this with any object anywhere, you shouldn’t even think about putting your hand near his mouth while he has something in it.

Gradually build up the type of object until you can do this with anything he has guarded in the past and only then you can go on to gently taking something from his mouth. Start with a low value object again, one he is happy to pick up but not one he has guarded in the past. You may have to wiggle it around to encourage him to play and hold it in his mouth. Give it to the dog and then (if it’s safe) put a really yummy treat such as liver, chicken or cheese, by his nose and catch the object as he drops it to eat the treat saying ‘thank you’ as his mouth opens and then give the article back. Do it all again. Take it slowly and build up to more interesting objects before going back to easy items and saying ‘thank you’ without the treat in your hand. When he drops it without having been shown the treat first, you should get a treat immediately from a nearby pot or your pocket to reward him.

How long will it take?

Well, it depends on a number of things such as how long he’s been guarding and the strength of his reaction. You realistically need to think about hundreds of toy and food swaps in all areas by lots of different (carefully coached) people to make a reasonable impact. Mum swapping for socks in the kitchen will not mean the hound won’t guard a chocolate wrapper from Uncle Fred in the garden. The good news is, although you’ll have to start from scratch for each new person in each new place, progress gets faster and faster once the hound has learnt the ‘game’. Once things are running smoothly you can stop him forgetting what he’s learned.

Tricks of the trade

Don’t be tempted to test him by taking away his food bowl while he’s eating. Instead, approach it occasionally (if he is happy to let you) with a few extra tasty treats and pop them in the bowl as he eats. He will soon start to welcome your hands near his bowl!

Beagle Welfare was formed in 1979 to give help and advice on beagles and to rehome those whose owners, for whatever reason, are unable to keep them.

Copyright © 2022 Beagle Welfare | The Beagle Welfare  Scheme is is a Registered Charity in England and Wales No.328633 | Website design by Progressive Web