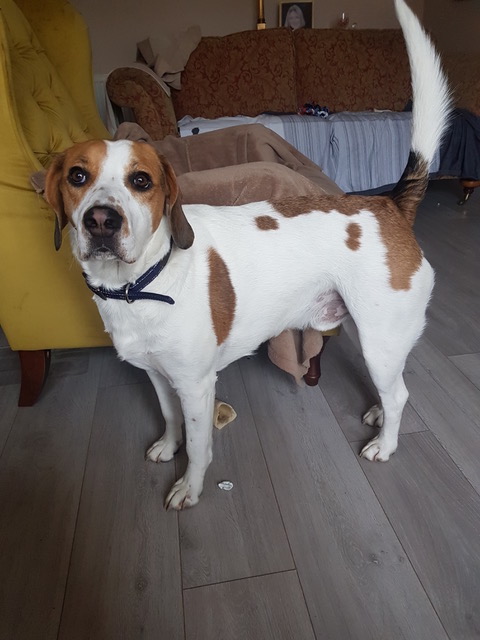 AJ is a two year old tri colour male, who needs a new home as his current owner is not able to give him the exercise and attention he wants.  He is neutered and microchipped.

AJ walks nicely on the lead, He is a strong lad though so will need a sturdy new owner. A typical beagle, he walks with his nose to the ground, hunting out interesting scents.  He has been tried on a Halti, but he did not like it.  AJ has been let off lead, and while he will wander off, he will sit and wait for you to catch up with him or come back for you.  AJ has not really experienced travelling, so this is something a new owner would need to build up with him if it were to be part of his regular routine.  When AJ meets other dogs while on his lead, he is very vocal but not aggressive, and is quite submissive when he meets dogs off lead.

At home, AJ is house trained but has never used a crate.  He can be left alone for a few hours, and although he is not destructive, he will chew up items like shoes which he finds lying around.  He has never tried to escape from his secure garden, but if a gate is left open, it’s possible that he would take himself away on an adventure, so he would need a secure garden.

AJ’s owner says that he can very occasionally resource guard high value items, eventually giving stolen items up after a period of negotiation, so we would not rehome AJ to a family with young children.  He has been fine with visiting teenage children though, so his new home could be one with adults only, or adults with older children who knew how to manage these infrequent incidents.  He has never lived with a cat, so we would recommend a cat free home for him.  He is a very happy and energetic boy, who would love to be part of an active family where his people will play fetch with him, and give him lots of fuss and attention as he grows into a mature adult.

AJ would possibly be better suited as an only dog whilst his new owner gets him socialised and trained. He does prefer men to women.